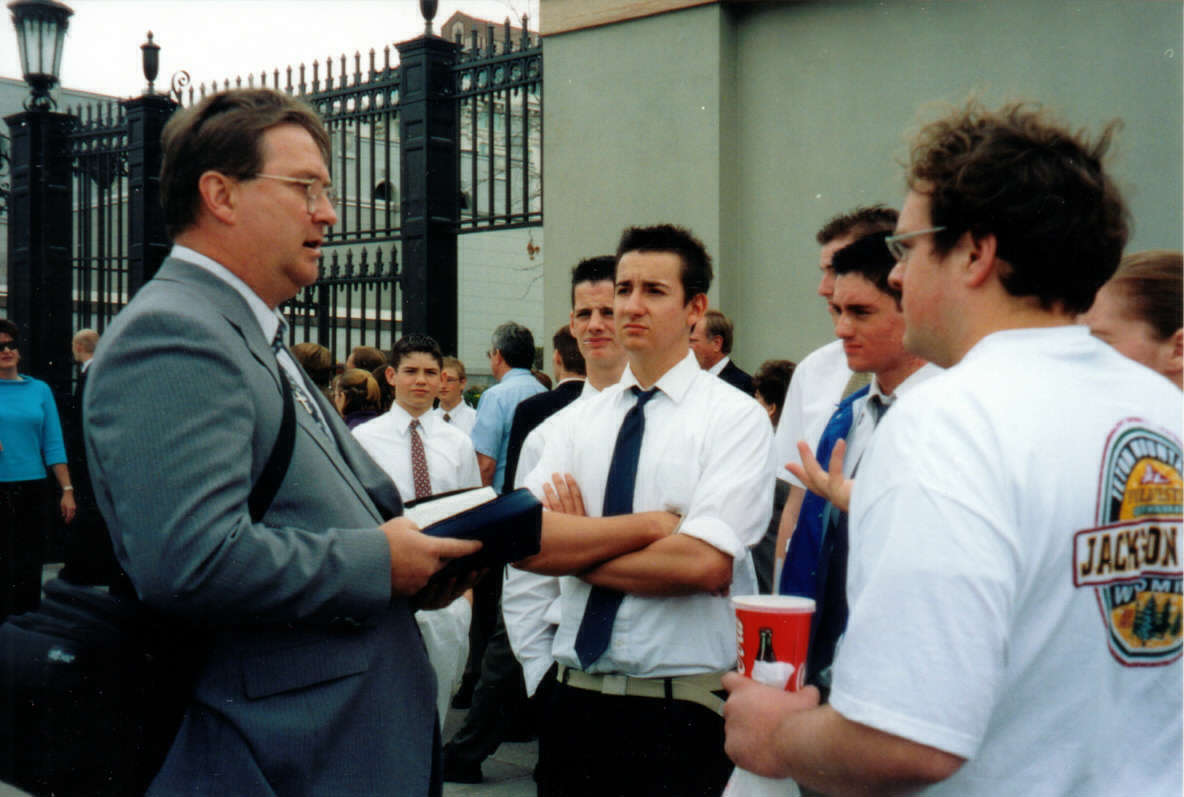 Most of my ministry has been in the field of counter-cult evangelism in general, and outreach to Mormons in particular. But it is all based in a view of evangelism that transcends any specialization. For that reason I think it not inappropriate to share here what some readers may find a bit “off -topic” from what they may customarily see as my focus of ministry.

On a message board on which I participate some-one raised the question of “Calvinism's influence on Evangelism and Missions.” The writer clearly assumed that Calvinism causes a de-emphasis or even abandonment of evangelism and missions among Calvinists and their churches. The truth is, that historically, the opposite is true. A great majority of Protestant missions and missionaries over the course of more than two hundred years have been Calvinist.

The discussion spurred me to respond. As a missionary/evangelist for more than thirty years, holding views most people identify as Calvinist, I certainly have not found them to impede my evangelism or my zeal for it. Rather, they have ground-ed and empowered it.

My primary motivation for doing evangelism is not obedience (though I am not unmindful of the opportunity for obedience) or, the fear that someone may be lost in hell because I failed do my duty.

My primary motivation for doing evangelism is to glorify God. That really is all the motivation I need to do evangelism.

Evangelism is an act of Worship

For me, evangelism is an act of worship. To worship is to ascribe to God all his own great worth. Proclaiming Christ and the goodness and greatness of God and his salvation is worship; thus evangelism done properly is worship—a vehicle for, a way and means of, glorifying and praising Him. When I do it that way, I find it rarely elicits no response. People are repelled, or intrigued, or join the worship, but al-
most never completely unmoved in any way.

As an aside to this discussion I would add that, thinking of evangelism in terms of an act of worship could supply a much needed correction to how, why, and what, is commonly done in the name of evangelism. Proclamation of a man-centered gospel is not proper worship.

Regarding additional motivation, I consider that the world, the flesh, and the devil are all three arrayed against people getting saved, and against me for proclaiming salvation in Christ. It would be natural to think of evangelism as a hopeless task and lost cause. There are always other avenues for worship. I only dare to do evangelism precisely because I am confident that God does know exactly who are his, that He intends to save them, that He accomplishes all his intention, and thus will lose not one of them.

God's Glory should be our focus, not man and his needs!

Having God’s glory as the focus of my worship rather than the salvation of people also provides a great relief and peace personally, knowing that the outcome of my worship is in his hands. He will use it as He sees fit. He will save whom He will save. I don’t have to worry whether I did or said, or failed to do or say, just the right thing. If what I do or say is God-pleasing worship, then that is enough. He’s got it all under his control. That gives me great confidence that when I evangelize He just may be pleased to use me, and it won’t just be a 'crap-shoot'. There is a real hope of someone actually get-ting saved, because it is his plan.

Another motivation is the people. Having God’s glory as the primary motivation for evangelism doesn’t leave one cold or indifferent to lost people. Far from it. An essential aspect of worship is praise and joy.

The more you are full of praise and joy, the more it spills out of you, not only in opening your mouth to speak, but also in magnifying the affections of the heart. Your heart is opened wide to others and you want them to share in the love and joy you experience. And, there is the expectation of increased and eternally enduring joy in the prospect of God using you to bring salvation to others, and in the fellowship you will have with them in eternity (Phil. 4:1; 1 Thess. 2:19-20) .

I believe in hell, and in the possibility of one going there. I don’t mind mentioning that to the lost. But using hell as a motivation to urge Christians to evangelize, as if someone will end up in hell who would have gone to heaven if only some Christian had done his duty, I find utterly reprehensible. It is a lie.

And especially when, as described above, there is so much richer motivation available to stir one to evangelism!

I cannot imagine a God or universe in which God would leave the salvation of any human being hanging, depending, ultimately, upon another human being.

I cannot imagine a God who could not save every person He had a mind to, unable, because they had a mind to go their own way. Everyone has that mind. Before being born again the only will anyone has is the will of the flesh. I cannot imagine that a God who loved me would leave me to make my own decision in the will of the flesh when my own inevitable, inexorable decision meant certain death and hell. I am so grateful that He caused me to be born again (1 Pet. 1:3) and gave me a new heart with which I could believe.

Virtually all Christians understand that what Jesus did in his work of atonement was what had to be done to save even just one sinner. Nothing more was needed to be done in order to save two, billions, or all sinners. It is not as if one more sinner, or one more sin, would have caused Jesus to have to suffer more than He did to make sufficient payment for sin, or as if He could have suffered less if someone had just sinned a little less.

Sin, contemplated as an object of the Atonement, is not a collection of sins, a quantifiable accumulation of individual acts, for which appropriate atonement may be ascertained by tallying up their individual weights. The price required for redemption of any person, is not merely the price of sins, but of sin.

Sin is not merely an infraction of the Law. Sin is a personal offense against God, a violation of God’s person. Not that He is, or can be, sullied by it. A raped woman is not sullied by the rapist; but she is violated. Her right to unmolested life, and her own sense of dignity as a woman and a human being have been torn, but not her own virtue. God’s virtue is not sullied by human sin. But any and all sin is an utter outrage against God. As an infinite being, as an infinitely holy being, the violation of God’s person by human sin is more keenly, exquisitely, painfully felt by God than anything any mortal human being has ever suffered.

Penalty and atonement must match the crime. Sin is measured by the violation, and the violation is against the person of God. No mortal sinner could ever pay, or atone, for such violation. The penalty of sin could only be paid by an infinite being, because by its nature, sin is something that cannot be remedied by any sinner. The atonement was infinite because it was made by an infinite being, for an infinite wound. But nothing in that fact requires that atonement be applied to all sinners. One could say God, or Christ, having paid for it with his own blood, owns the atonement and all its infinite salvific value. He is free to do with it whatever He wants.

Out of the mass of humanity, every one of whom has violated God’s person, God chose to save some. What He did to save those He chose is exactly what he would have had to do to save the rest, but what He did was never intended for any but those He chose. To say that what He did to save those whom He chose automatically entitles the rest to anything but their just desserts, or obligates Him to apply his work to them, is monstrous.

A man may have an unlimited source of wealth, which he may dis-tribute to any person or number of persons as he chooses, to none of whom He owes anything, but all of whom hate him, and all of whom need his money. If he freely chooses

to give some to anyone, he is not thereby obligated to give some to another, much less to everyone. And he is not a “respecter of persons” for having given to some and not others, because his giving is not based upon any act or quality done or possessed by the recipients. His giving is according to his own will and purpose, the reason for which is not subject to judgment by any but him-self.

Instead of wealth and money, put love here, and God as the donor, and the truth remains unchanged. And it is hardly becoming for recipients of grace to be shaking their fists in God’s face because He did not give more grace, or grace to all.

God will have what He always wanted in the end—a saved humanity. That does not require saving every human being who ever lived. He will not have “lost” what He never intended to save.

I love people, and I want and hope they will be saved. But whether one is a Calvinist or an Arminian, we all know and agree that only God converts and saves any person.

When we pray asking God for someone to be saved we are asking Him to do something for that person which the person will not and cannot do himself, something God alone can do. We all employ many means and methods to reach the lost, and we believe God uses means. But we all know that none of those means will accomplish their hoped for purpose, unless God steps in and changes the person’s heart.

Regardless of all the evidence that may be accumulated regarding any given person, none of us can ever say unequivocally that this or that person is saved or not. I don’t need to know who in the world are God’s elect, or believe in a universal possibility of salvation for every person to ever live, in order to positively proclaim the gospel to anyone I meet. I don’t know whether the person I meet is one of the elect or one who will ultimately be lost, but the message remains the same. Jesus Christ died for sin and sinners, and all who believe (put their trust) in Him for salvation will be saved.

I proclaim that. I rest in that.

Timothy Oliver was raised as a Seventh-Day-Adventist, and in is late teens became an active member of the Church of Jesus Christ--Latter Day Saints (LDS) and a missionary for them.  After being confronted with questions during his mission, which he could not answer, he finally was saved by the sovereign grace of God Almighty.   He is a friend and consultant to RethinkingAdventism.com and a regular contributor.

Timothy Oliver is currently an active missionary in Malaysia, along with his wife Suzie.  If you are interested in supporting them make your check or payment out to: